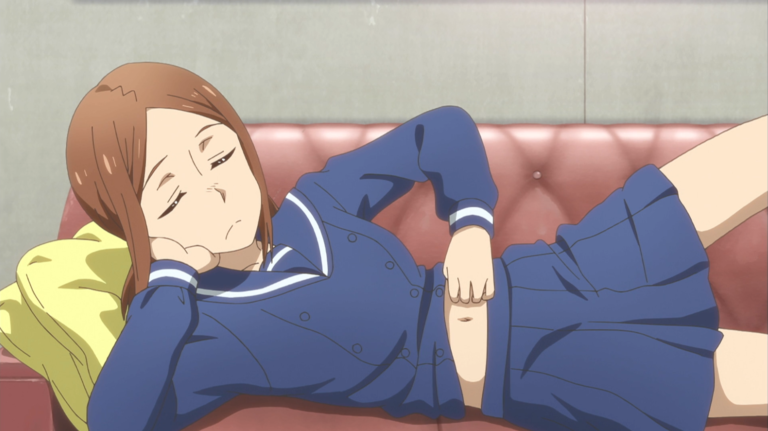 The President of the club is a slouch. Lackadaisical. Casual and conniving…if it’s convenient. A bit self-centered but overall helpful in what role she’s meant to play. Assuming you can find her.

1. She will being using the most colloquialisms of the bunch (not that it’s constant). So metaphor, jocular demeanor, anagrams, contractions, ellipses…basically all the things that make for “countryside accent” will come across with her. “Formal” is a rare, circumstantial occurance.

2. While Natsumi likes ending her consonants, Yuuki won’t. If the word can end on a soft sound, it will. Few vowels, a bit slurred (more like, “combined”), and basically looking for ways to remove syllables. Again, she’s not uneducated and reading accents like that is miserable when it’s constant, so she’ll still be using the correct word for things, it will simply be less erudite about it. And when speaking that correct word, it won’t be childish, just lazy. She’ll be “gon’ fishin'” and when you get to her dialogue bubble, she’ll be getting to the point (or setting up the scene).

3. She is conniving, so in panels/pages following her fox ear appearances, she’ll be slightly more well-spoken and appealing towards Hina (something the others will quickly see as odd). But, that conniving side is either due to laziness or (much later) some possibility in profiteering. The only person she’s mildly at odds with is the teacher, Sayaka.

4. Oh, and when it comes to names, she’ll be surprisingly more comfortable with last names more than first names. Again, lack of honorifics, but that’s more due to the fact they’re “extra syllables” than anything.